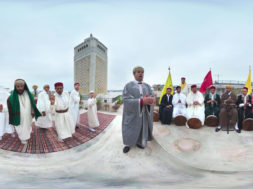 VR Films and interactive experiences seem to be pushing the way at film festivals as ZIKR: A Sufi Revival becomes the first VR documentary to be acquired at Sundance.

The deal was brokered on the last day of Sundance by Dogwoof’s Andy Whittaker and Tomorrow Never Knows’ Nathan Brown. The agreement entails funding to support additional development, including an unprecedented online version of the VR experience allowing multiple players to be networked at once into the experience from around the world.

ZIKR: A Sufi Revival takes four participants on an interactive, virtual reality journey into a world of ecstatic ritual and music in order to explore the nature of faith alongside followers of this mystical Islamic tradition. By opening up an experience to Sufism, dancing and singing alongside members of the Tunisian group Association de la Renaissance du Maalouf et du Chant Soufi de Sidi Bou Saïd, it aims to shed light on a crucially misrepresented religion, revealing an Islamic practice of inclusion, acceptance, art, joy and understanding.

“There is real demand and a growing market for distinctive storytelling in VR/AR,” said Brown, CEO of Tomorrow Never Knows . “To partner with Andy and Dogwoof, one of the world’s most acclaimed producers and distributors of non-fiction stories, is more than a signal, it’s a lightning bolt for the entire industry.”

Having changed the face of non-fiction storytelling in the past decade, Dogwoof, and their newly formed VR-focused company, Other Set, are now poised to change how users engage with these crucial stories of social impact in VR. The acquisition of ZIKR adds to their award-winning and visionary catalog including Blackfish , The Act of Killing and OJ: Made in America .

“ZIKR is a gem. A profoundly moving VR experience, which will change people’s perspectives,” commented Dogwoof founder Andy Whittaker . “We cannot wait to show it to international festivals, theaters, museums and art venues knowing it can have the kind of profound impact Alejandro Iñárritu’s piece has had at LACMA.”

“Andy and his team at Dogwoof, have proven themselves over and over with their work in traditional documentary,” said Gabo Arora, director of ZIKR. “And, with their first VR acquisition with ZIKR, they will bring their same tenacious spirit to making sure more and more people can experience a story very pertinent to what’s happening in the world now. I couldn’t dream of a better home for ZIKR or a better team than Dogwoof for global distribution. I am honoured to be joining their award winning catalog.”

ZIKR is one of the two high profile VR films to be acquired at Sundance this year alongside the recent acquisition of Spheres: Song of Spacetime.