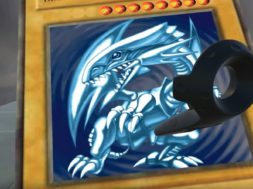 Yu-Gi-Oh! is probably the most popular card game anime in the world besides Pokemon. First airing in 2000, the show brought about some cool ideas that ultimately led to the card game becoming a hit. Now, we might have a chance to see it in VR thanks to this developer and fan.

Joseph Min is currently working on bringing Yu-Gi-Oh! to virtual reality in partnership with another YouTuber named MicrowaveSam. The VR game allows you to face off against another opponent on a battlefield where you summon your cards.

In the video you can see how the animated monsters use their spells to cast the attacks on the opponent. You start off with a set amount of cards and you slide it into your wrist device to summon the monster. When you do take certain actions you will hear the little voice snippets of Yugioh saying certain lines.

There’s also an AR version of Yu-Gi-Oh! where you can see the digital cards and characters come to life in the real world using the Microsoft Hololens. You can clearly see the card characters duke it out on the streets which is quite fascinating.

The VR and AR Yu-Gi-Oh! game is fan-made and isn’t an official release by Konami or the other rights-holders. You can tell that this VR game is a work in progress but shows some big potential. There are other VR board and card games out there such as Settlers of Catan and Dragon Front that provide a similar experience. But having Yu-Gi-Oh! coming to life in VR would be a completely surreal experience.

The game itself looks to be tested on the HTC Vive at the current moment. Min will be uploading a beta version of the game in May 2018 where beta testers can have a go at it. There are still a lot of improvements that needs to be worked on so we’ll keep an eye out on this Yugioh VR and AR project. The game will most likely be free so that’s another perk to look forward to.