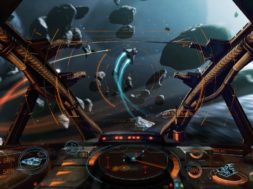 A 16-year-old developer and YouTuber named Austin Wilson is winning over the internet with his brilliance in transforming Amazon Alexa into a Space Ship VR voice voice assistant. With a simple question of, “What if I could use my voice as my controller,” Austin turned Alexa into something incredible.

“That question inspired my idea to implement Alexa into my space ship in Elite Dangerous, an exploration, trading, and combat game, in which you can explore the Milky Way Galaxy on a galactic scale. Said Austin. When I first researched this question, I found that Elite Dangerous did have a way to control your spaceship with your voice. It was a third party product that was essentially voice recognition software that would respond to you by selecting a random sound file and simulated a key press to operate a specific function on your ship. I personally found this very limiting, because this did not actually allow you to talk to your ship. I wanted the functionality to ask where I was in space and actually get a response back, and, after more research, I found that there was not a way to do this yet.

So Austin came up with his own solution by using Alexa. The young developer posted detailed instructions on how re-programmed Alexa to become a voice assistant in Elite Dangerous. It’s comprised of 3 parts and processes involving visual charts for assistance in the processes.

In the video above you can see Austin asking Alexa questions such as, “Where Am I?” and Alexa responds accordingly with accurate answers. The converted voice assistant even goes on to give detailed information about a certain area in the galaxy which can be quite useful. The space ship version of Alexa sounds as if it was made for games like Elite Dangerous.

There have been attempts of integrating a voice assistant into the VR world such as IBM Watson in Speech Sandbox (available on HTC Vive) but nothing to the scale in which Austin has achieved. This opens new ground and new innovations in VR that we’ve previously never recognized. I personally believe with a voice assistant in VR, games and experiences can become that much more immersive.

Games like Elite Dangerous surely “play better” with a VR voice assistant. Having that extra factor in the game makes you feel like your truly in command of your space ship. And having a voice assistant to help you out in your space adventures increases that level of excitement.

With the combination of HCS VoicePack, you’ll be well on your way in converting Alexa into your futuristic robot assistance in outer space combat.