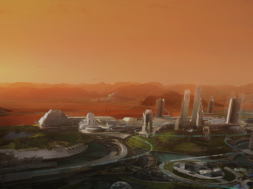 HP has been quite the innovator when it comes to PC hardware. I know that one of my first computers I’ve ever owned was a HP desktop. During that period of time they were able to deliver a sound solution capable of running games such as Diablo II and Starcraft. But they’ve come a long way since then where HP’s focus now is delivering solutions of the future.

In partnership with NASA, HP has launched a new initiative called ‘Mars Home Planet’ where they plan on sending 120 ZBook Workstations to the International Space Station (ISS). The goal behind this initiative is to help push the boundaries of science and discovery while also discovering new facts about Mars.

In addition, HP will be releasing Fusion Mars 2030 VR experience where they plan on taking users to the foreign planet. “Together we will transform this same terrain with cities, buildings and infrastructure for 1M humans,” said HP.

The first 10,000 people to register for Mars Home Planet will receive a free copy of Fusion Mars 2030 VR experience which is set to launch in early August.