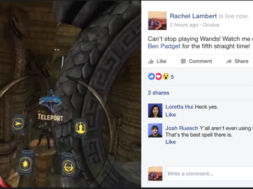 Oculus has been on a role as of late with new announcements and features for their VR platform. Today, the company has unveiled that you will be able to share your VR experiences by live-streaming to Facebook. With the use of the Oculus Gear VR headset, you can share a livestream feed on to your facebook for your friends to watch and seewe And this feature will be available starting today, according to Facebook.

We want to make it easy to share memorable virtual moments with your friends and family on Facebook. Today, we’re beginning to roll out Facebook Livestreaming—direct from Gear VR.

Whether you want to share the suspense of Face Your Fears or show off your sorcery skills in Wands, you can take your friends along for the ride. Just select the “Livestream to Facebook” button from the Universal Menu when you’re in VR, and you’ll instantly start livestreaming to your friends on Facebook.

This feature is currently unavailable for people in the US who use the Gear VR headset. But they have informed us that it will be available with the latest version of Android on Samsung phones in the coming weeks. This is quite a significant use as millions of people currently own the mobile VR headset.

It comes at a much more lower cost point and can be powered using your mobile Samsung device. While there are options to live-stream through YouTube and Twitch, this is the first direct integration on to facebook using an Oculus product.