You Can Now Relive R.Kelly’s Golden Shower Moments In VR 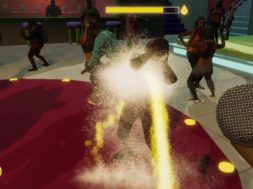 You Can Now Relive R.Kelly’s Golden Shower Moments In VR

Yup, this just happened. You can now step into the infamous artist’s shoes and give the audience the golden shower moment.

R.Kelly has been notorious for many things which society deems highly unethical. But one of the most strangest occurrences was the story of him peeing on people.

In this new VR game called R.Kelly VR, you will step into the shoes of musical legend R. Kelly.  Walk around a club and pee on anybody you wish.  Spray as many people as you can before the clock runs out.  You’re a superstar, so you don’t have time to waste..

Yes, your goal will be to pee on as many people as possible and eradicate them with your acidic urine. Currently the game is available on the Oculus Rift for free and you can download it here. A SteamVR version is on the way according to the indie developer garbagecangames.

tags: music vr r kelly vr
previous How These 2 YouTubers Got Stuck In The Middle Of The Ocean In VR
next Baobab Studios Releases First Trailer For Bonfire Featuring Ali Wong
Related Posts