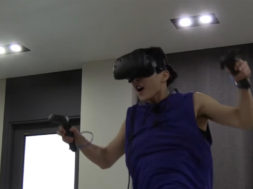 KPOP is currently one of the hottest things on the internet and YouTube where these Korean idols receive millions, if not billions of views on their creative music videos. One of the hottest groups in the KPOP world is a group called EXO. It’s made up of 9 individuals who all seem to have quite the talent in dancing and singing.

Recently, one of the members from EXO named Xiumin got his hands on the HTC Vive to try out what VR is all about. From the looks of it, it doesn’t seem to be Xiumin’s first time trying out VR. Rather, he seems pretty adept to the device and how the controls work in the virtual world.

In the video above you can see that Xiumin is playing a VR game called Richie’s Plank, famously known for allowing users to step out onto a plank that’s 160m high above the ground. While many first time players get startled with the quick height advancement, Xiumin seemed to be enjoying himself as he flies around in the virtual metropolis.

Xiumin also seems quite excited about the experience as he gets in a superman like pose to get around in the city. He also seems to be playing a game called Ski Jump VR where users go off a gigantic ski slope.

It’s nice to see how mega pop stars such as Xiumin casually play VR games using quality VR headsets. They seem to enjoy the experiences available on their off-time. If you have yet to try Ski Jump or Richie’s Plank, we highly recommend you do so as it provided us with a lot of fun and thrill.