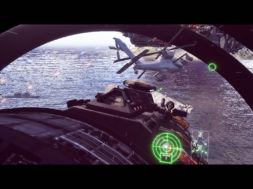 Ever since the Oculus Rift and HTC Vive was introduced into the marketplace, we’ve seen staggering amounts of VR games that focused on war, shooting, and action. But for some reason, none of those VR titles stuck out amongst its competitors. But Worlds At War by Muddy Pixel might be a different story.

While there was some hesitation going into this game, we quickly observed how detailed the virtual environment was. On board a battle-cruiser in a foreign body of ocean, the game quickly immerses you inside a hostile environment where you must battle alien cruise ships trying to invade Earth.

Details in Worlds At War

To do so, you must use a variety of vehicles including helicopters, fighter jets, boats, and cruise ships. You will notice that they all drive and manuever around a little different from one another and have different weapons equipped on the vehicles.

The game currently requires you to use regular controls such as the Xbox One controller or a keyboard and mouse. It is not yet synced with the motion controllers which is preferable for any VR game.

When you first encounter an enemy cruise ship, you will notice how gigantic they are. These vessels are heavily armed and will be targeting any human life form. Instead of ordinary bullets, the aliens use laser beams to try and take you down.

Vehicles in the game

The most special component to this VR game is when you are in a cockpit of a fighter jet. You instantly get the feeling that you are on board an advanced machinery designed to fly and destroy. There is some getting used to as you try to fly the fighter jet but will quickly get the hang of it. Inside the cockpit you can see all the little details with gauges, controls, navigation, and targeting.

When you are on-board the helicopter, it actually does make you believe you are inside the flying vehicle. The dashboard, propeller sounds, and the visuals makes the game almost feel like a helicopter simulation. You will notice that it flies a little slower than the fighter jet and you will have to get used to that.

When you control the boat, you will notice how different the game becomes. You will be attacking from land to air which makes things a little more interesting. You won’t have the luxury of moving around in 360 degrees but are rather confined to a linear space.

The game actually reminds me of Battlefield but in virtual reality, actually. It has that special component and flare to it that really draws you in. Worlds At War is currently an early access game that’s available for $12.57 on Steam. We believe this game can be priced much higher for the value and entertainment but the creator has chose not to do so which is amazing.

The game is available on the HTC Vive, Oculus Rift, and Windows mixed reality platform. We recommend you check out the game for yourself and see what the rave is all about behind Worlds At War.