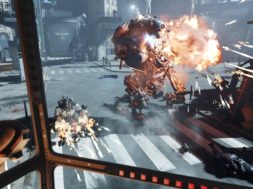 Last year Bethesda announced that they will be releasing some new VR games such as Wolfenstein: Cyberpilot. Now the day of release has finally arrived.

Woflenstein: Cyberpilot has just made its release and it is available for VR enthusiasts to get a taste of the immersive world. The game is currently available on the PlayStation Store for $19.99 and on the Steam marketplace for $19.99 as well. The game is compatible with HTC Vive and Valve Index for the mean time. This means that if you want to play the game on the Oculus Rift you will have to go through the third party channel route.

Paris. 1980. You’re the best hacker in town. Your mission: aid the French resistance by taking control of powerful Nazi war machines. Ram, gun down, and burn your way through the City of Love, leaving dead Nazis in your wake.

The city looks to be war-torn and surrounded by evil Nazis and crazy looking robots. But as a cyber-hacker you will be able to infiltrate these robots and turn them against their own.

The specific robot in the trailer seems to be able to breathe fire and destroy just about anything that moves. According to storyline description, the Resistance has upped its tech game in the two decades since the events of Wolfenstein II: The New Colossus.

tags: bethesda games HTC VIve psvr wolfenstein cyberpilot
previous Get Rid Of The Takelings In VR
next Wookie's Blade Takes You Back To Ancient China In VR
Related Posts