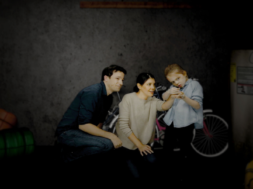 Within has been releasing some of the most powerful VR content available today with stories that’s harpooned the hearts of many. 360 videos such as The Possible series have created ripples in the industry by reshaping how we present unique stories in an immersive environment. Today, Within looks to continue that lineage with the release of Giant, directed by Milica Zec.

This story is loosely based on Zec’s life and her struggles with war back in Belgrade, Serbia. “When I was seventeen, bombs rained down on my hometown,” said Zec. “Flash forward to fifteen years later. I was working as a filmmaker and editor in New York City when I met screenwriter Lizzie Donahue and opened up to her about my experience growing up in a war-torn country. We decided together to create a short film that would speak to war in a Western context, reaching those viewers who had never experienced its wake.”

Giant will take you inside the basement of two parents who struggle to distract their young daughter by inventing a fantastical tale as bomb blasts draw closer in an active war zone.

This was Zec’s first shoot in VR which helped push her into uncharted territories as a director. She found great difficulties while filming but luckily managed to find some assistance through companies such as NVIDIA, HP, Epic Games, Microsoft, Framestore and Comcast Ventures. These tech companies helped corral the inventive hardware and software to bring Zec’s vision to life. The Giants’ collaborative project even included the likes of Technicolor Sound Lab who helped design the 360 and VR sound.

With such passion and power behind the project, Giant should be a story that everyone should check out. The featured VR film is available today through Within’s VR app on the Oculus Store, Steam VR, Google Play, App store, Viveport, and the PlayStation store.

You can also choose to watch it on a standard screen with 360 capabilities.