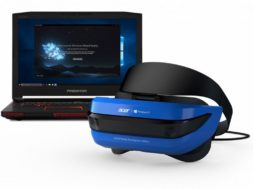 As mentioned earlier last year, Microsoft looks to bring a plethora of virtual and augmented reality devices to the market in the coming months and years. They have partnered up with companies such as Acer, ASUS, HP, Lenovo, and 3Glasses to release a variety of headsets. Today, Microsoft announced that they’ll start shipping its mixed reality dev kits to developer partners starting next month. The news was announced at the Game Developers (GDC) 2017 conference in San Francisco.

Today, at the Game Developers Conference (GDC) in San Francisco, we shared the next step in our mixed reality journey. As we continue to build on the momentum of the past year, starting this month we will begin to ship developer edition headsets created in partnership with Acer to our developer partners.

According to Microsoft, these mixed reality headsets will be the first to deliver built-in inside-out tracking. This means that there will be no need to purchase or install external trackers or sensors on walls. This is a plug and play model that takes care of room-tracking for you.

The mixed reality dev kits will include the Acer headset, along with documentation and access to Windows 10 Insider preview builds along with the software development kit (SDK). This will enable developers to properly build the mixed reality applications on Windows.

Below is a list of  hardware that the Acer Windows Mixed Reality Development Edition Headset will come with.