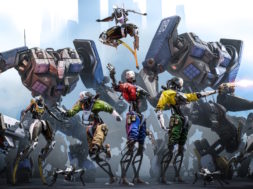 Oculus has set a high bar for itself and the VR industry with the announcement of Robo Recall earlier in the year. Oculus, in partnership with Epic Games has been developing this massive title with intentions of making it a AAA game. Tim Sweeney, founder of Epic Games, mentioned last week that this will be an exclusive title for the Oculus Rift which with a massive budget.

“In 2006, a world class Triple A game cost 10-20 million to produce now they’ll cost up to 100 million. It’s become so expensive and so risky that only massive publishers can really afford to put these kinds of games out,” Sweeney said. “Oculus has been willing to fund third party software that’s exclusive to their hardware. That’s a perfectly acceptable way to jump start an industry…For example, Oculus is funding Robo Recall which has a budget that’s close to the budget of the entire first Gears of War game.”

Halo and Gears of War are two games that were exclusively released on Microsoft’s Xbox consoles. They became tremendous hits and have gone on to release sequel titles that have become more refined and a lot more expensive.

In order for a successful title to enter the VR market, they must first focus on quality of content and game length. We’ve seen VR games with one or the other but never both. Robo Recall seems to be on track to becoming the first ever VR game with those two qualities. We’ll see if Oculus is truly up for the task to tackle this issue.