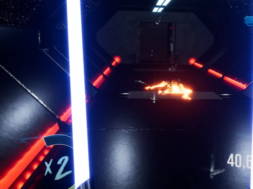 Epic Games has been super supportive with their newly released VR game, Robo Recall. The game has garnered a lot of attention in the past month with many VR enthusiasts playing the game on a daily basis. Epic Games even opened up Robo Recall to where developers can create custom mods. And by doing so, people have developed helpful modifications such as locomotion and Revive where it allows you to play the exclusive Rift game on the HTC Vive. And to add to the excitement, MGS Studios have released a new mod which allows you to wield a lightsaber.

The laser beam blade allows you to deflect oncoming projectiles and even throw the blades to eliminate the enemy robots. The lightsaber returns to you once you have thrown it at your enemies. Tonsta31, who is the owner of MGS Studios mentions that he created this mod over a bet.

“Now about 8 hrs of work done and have 6 days left for my bet Can I convert Robo Recall into a Star Wars type game with a mod within 7 days, this is not including character models they will not be done in this mod. This mod is being done only by me for a challenge. It is not for sale and any sounds, object’s used are licensed to their respective copyright holders.”

Below is some information that Tonsta31 provided for the Star Wars themed Mod:

– LightSabers in the new version dismember and deflect better and do not act like they are lead pipes
– Laser projectiles are just there for test purposes and will be replaced.
– AI have been slightly reworked to come more towards you and now multiple can attack at once (In stock for some reason most wait until you are nearer them or you kill one)
– There are force powers but not to use as yet.
– Started rigging Darth and some bots

– Will be story driven across multiple levels
– only made by ME and about 20 hrs worth including making the level lol so do not expect much.
– Regular updates will be for the donators but this thread will be updated too after.