Apple has just unveiled their new lineup of the MacBook Pros which got a bit of an upgrade since their previous generation. Tim Cook showed off the new ergonomics of the laptop and demonstrated the capabilities which include an OLED touch screen display on the keyboard call the TouchBar. It’ll give you the ability to shortcode actions and items to make life a little bit easier. It’ll also have a Touch ID pad for easier and more secure access.

They have also centered around the idea to become a little more green and eco-friendly. Every new MacBook Pro will come with: 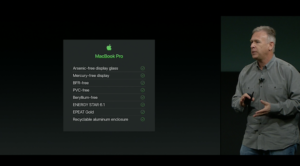 But what we wanted to find out was if it’ll be able to power VR and AR technology. And to our disappointment they didn’t reveal any plans to integrate with those technologies quite yet. However, they did reveal the specs and upgrades that are suppose to come in the new generation MacBook Pros. 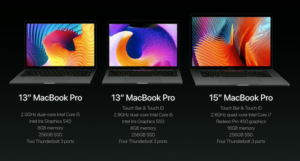 The new 15 in. MacBook Pros will include a 6th generation Intel Core i7 Processor with 2133 MHz of Memory. It’ll include a Radeon Pro GPU with Polaris architecture to power their graphics. The 15 inch MacBook Pro’s will start at $2,399.

The 13 in. MacBook Pro will have the option of choosing from an Intel Core i5 or an i& processor. This version will include an Intel Iris GPU for graphics. The 13 inch MacBook Pro’s will start at $1,499.

Apple claims that they are lightyears faster than their previous generation MacBook Pros as well. 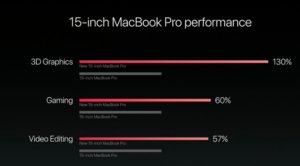 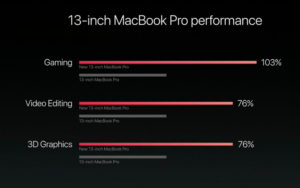 These new MacBook Pros are available to order today with shipping estimates around 2-3 weeks. With these new specs, we wonder if it’ll be enough to withstand the computing power needed for VR and AR technology.