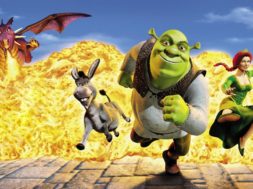 Not a song, but a whole movie is now available to play along to on Beat Saber. Yeah, you heard that correct. Players on the game will be able to smash some blocks around Shrek, donkey, the princess, and the whole crew.

Usually, songs last around 3 to 5 minutes on Beat Saber but this will be taking it to a whole new level. Shrek itself is around 90 minutes long so you will be having to smash beats for a very long time (think of it as an endurance race).

And to prove that it’s real, BennyDaBeastLIVE hosted the whole playthrough live on Twitch. For close to 90 minutes, Benny stood around slashing through the oncoming beats while listening to the whole movie. You can hear Mike Myers, Eddie Murphy, and Cameron Diaz all in character and the beats matching with their voices.

This is not an official release by Beat Saber. Rather, it is a track created by KingPeuche which can be downloaded here.

The track itself is free and officially titled as Shrek Saber. If you are up for a long adventurous audio VR book like challenge on Beat Saber, this Shrek Saber might be the track for you.

As far as we know, this is the longest Beat Saber track to date. But soon, KingPeuche will be importing Shrek 2 as well. We might also see other modders create movie tracks of their own. But make sure to play the game while you can as we have no idea how long Shrek Saber might be available.