What You Need To Know About The Vive Cosmos VR Headset 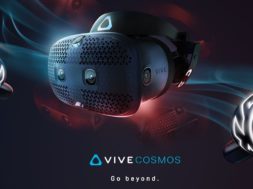 What You Need To Know About The Vive Cosmos VR Headset

HTC has been teasing their upcoming Vive Cosmos VR headset since the beginning of this year and they have finally announced some specs dealing with the VR headset.

Vented front design: A new venting system keeps air flowing so users can stay in VR for longer without fatigue and stay cooler.

Modular face plate: Cosmos can grow with you over time due to a swappable face plate that can be updated for different XR needs in the future.

Flip up design: Offering absolute comfort with a convenient flip-up halo design, allowing users to easily step out of VR without removing their headset.

The Cosmos is stated to provide VR experiences at 90 FPS. They will also include an LCD display with 2880×1700 combined resolution which is an 88% increase over the original Vive headset.

Also, to reduce the screen-door effect they will be providing a “real RGB panel” with increased subpixels. This will provide 40% improved lens clarity over the original Vive VR headset.

As for the price, there still isn’t a specific number yet. Any pricing number out in the public is still all rumors. In addition, there isn’t a set release date in mind. But it does show that the Cosmos headset will provide their second gen improvements over the original Vive headset.