What Will Swords Of Gargantua Offer VR Players? 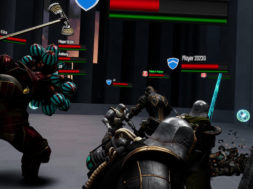 What Will Swords Of Gargantua Offer VR Players?

Swords of Gargantua is slated to be an online VR game where the world is dominated by a race of giants called the Gargantua. It’s categorized as an online VR action/RPG game where you and up to three players unite to fight in real-time battles against the Gargantua and its forces; all in finely tuned realistic sword battles.

Players will have 30 weapons to unlock. This will mostly vary in different types of swords. As far as levels go, there will be 100 stages to complete in single player.

The developers of Swords of Gargantua, Yomuneco, stated that as you progress through the game, you will be faced against the massive titan “Gargantua”; larger than anything you have faced before.

Above, you can see how some of the enemies will appear, some being a lot bigger than others. Gumi has not announced when the game will be done but it is slated as “coming soon” some time in 2019. Swords of Gargantua will be available on both Oculus Rift and HTC Vive. We look forward to seeing some more footage and even the Beta for the game.