What We Can Expect From Star Wars: Vader Immortal Part 2 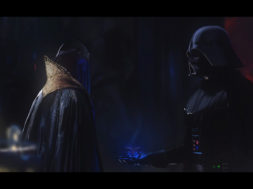 What We Can Expect From Star Wars: Vader Immortal Part 2

During SDCC 2019, ILMxLAB and Star Wars provided a short glimpse into the next episode to Star Wars: Vader Immortal.

The team provided a detailed overview of the world they are creating within this new saga and episodic content while going on to explain what we should expect.

“You will get to use the Force in Episode II,” Ben Snow, director of Vader Immortal, tells StarWars.com. “The first image is really part of the training. The way we thought about this was, we wanted to give you the Vader equivalent of Yoda teaching Luke about the Force in Empire Strikes Back. So we wanted it to be slightly darker and more twisted. He talks about the power of the dark side as well as the things you can do with the Force. So in this moment that the concept art reveals, you see him starting to manipulate objects and he’s starting to show you how you can use the Force to create something. But then, of course, Vader takes it in his own direction.”

Snow also goes on to explain how important using the force will be in the upcoming episode. “That is something that we’re still working really hard on,” Snow says, “to make it feel as good as we can.” Without a lightsaber, initially at least, the Force will be your only real weapon. “Our goal is to make the Force in Episode II as satisfying as the lightsaber felt in Episode I.”

Another important piece in part 2 will be the Black Bishop. “He becomes quite important in Episode II, and we learn about his background,” Snow says. The tomb will be found within the ancient fortress discovered toward the end of Episode I. “We’re trying to make it feel very atmostpheric. This is a hidden area of the fortress that hasn’t really been explored. The Mustafarians know of it through legend,” Snow teases. “It’s a good chance to poke around in an unexplored part of Star Wars.”

A release date has not been announced but stay tuned for more updates in regards to Star Wars: Vader Immortal Part 2