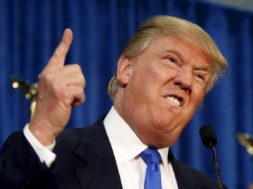 We all know how loud and rambunctious Donald Trump is. But have you ever thought to see things in his perspective? Well the comedians over at Boom Chicago has. With the help of 360 video technology, the comedic team has launched a skit depicting this very scenario.

The skit takes you inside a rectangular office rather than the oval one because it’s Donald Trump. You’ll be seeing his daily life through his perspective meeting with his staff members and going over scenarios in a comedic fashion. And with the help of 360 VR, you’re able to see the interesting set that Boom Chicage has built. The video lasts around 5:20 minutes and is available to watch on Jaunt VR.

You can view the video in traditional settings via PC and Mac or you can watch it in VR through the Samsung Gear VR, HTC Vive, and Oculus Rift by downloading the Jaunt App. The choice is yours. Whether you’re a fan of the guy or not, its relieving to bring humor during these times where there’s so much tension surrounding the presidential elections.