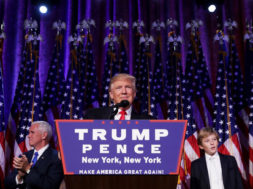 It is now official; Donald Trump will be the next president of the United States of America. With that comes new policies and new laws. And many are wondering how this correlates to the growth of technology, in specifics to VR & AR. Well, to put it lightly, it has a lot to do with it.

We’re going to find an unprecedented amounts of change coming in under Trump’s policies and laws. He has stated repeatedly that he wants to bring back manufacturing jobs to the U.S. and impose high tariffs on Chinese manufactured products. As we know, most of our hardware for VR is manufactured overseas in China. This has allowed companies to invest in VR hardware and headsets to try and depreciate the ridiculously high prices. But with his future policies, we could expect a jump in prices for VR related hardware in the future.

But Trump has also promised lower tax rates for U.S. corporations. With tax cuts, companies will be able to invest their assets in various sectors and purpose the money in trying to reduce product costs.

Donald Trump is also for stricter laws on how immigrants move and work over here in the U.S. There are many brilliant minds who aren’t citizens of the country trying to innovate the VR & AR industry. With stricter policies, these individuals will become vulnerable to deportation and extradition, which ultimately poses a threat to the growth of the VR & AR industry.

But this creates opportunity for the country’s citizens. While there are brilliant minds all over the world, U.S. based companies will be able to hire talented individuals who are citizens. This many not be a popular opinion globally but many Americans believe that it should reward its own citizens (observed by Trump’s election to presidency).

There will be many changes coming with Trump’s inauguration on January 20th, 2017 so make sure you stay tuned for the latest updates and news.