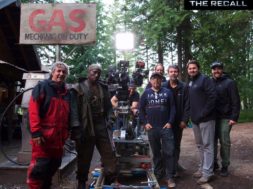 Wesley Snipes was majorly popular back in the early 2000’s for his hit movies, Blade. He played the role as Stephen Dorff, a vampire with human traits that protects humans from evil vampires. They successfully launched 3 movies and made big box office sales reaching $415,098,928 combined.

Since then, Wesley Snipes has been under the radar.. until now. It’s been recently announced that the actor will be taking on a role as “The Hunter” in a movie called The Recall. This particular film will be directed by Mauro Borrelli who has was a part of many amazing movies (we cant list them all). Alongside Wesley Snipes will be RJ Mitte (from Breaking Bad) acting as a character named Brendan, Jedidiah Goodacre as Charlie, Niko Pepaj as Rob, Laura Maria Bilgeri as Annie, and Hannah Rose May as Kara.

In The Recall, five friends go on vacation to a remote lake house where they’re expecting to have a great time, unaware that Earth is being invaded by aliens and mass-abducting humans.

The coolest news about all of this is that their will be a virtual reality experience prior to the launch of the movie. Mind’s Eye Entertainment will be partnering up with SkyVR, VMI Worldwide, Bridgegate Pictures, Invico Capital, and Talking Dog Studios to release this VR experience called The Recall VR Abduction. This featured VR experience will be about Wesley Snipes “The Hunter” character right before the alien invasion happens on Earth. The 360 video will be perceived through Brendan’s eyes as he comes across “The Hunter.”

“Shooting in VR is similar to shooting a play, or performing a play,” Wesley Snipes said. “You don’t have the luxury of cuts, and short takes, and do overs. You have to be on your game, and since everything is in the shot, everyone else needs to be on their game at the same time.”

There hasn’t been word on which VR platforms the experience will be available.