We May Soon See VR For Xbox One X 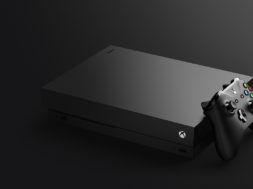 We May Soon See VR For Xbox One X

It’s quite interesting to see how Microsoft is handling VR at the current moment. They’ve announced a slate of Windows VR headsets with their affiliated partners but has kept mum on implementing a VR solution for their Xbox One X console.

In the past, Microsoft was very gung-ho about implementing “mixed reality” to their Xbox One devices but updates have come up short until now. In a recent interview with CNBC, Panos Panay, corporate vice president of devices at Microsoft provided some key updates about the Xbox One X console releasing on November 7th.

Panay first described how the hype and demand for the new console is very high. “I won’t talk about the exact numbers but the demand is super high, we are very, very excited about Xbox One X right now.” This is quite interesting as Sony recently shared their numbers publicly showing that they’ve shipped over 67.5 million PS4 units worldwide. It’s estimated that Microsoft has sold around 33 – 35 million units worldwide which is significantly lower than PS4 sales today.

“I won’t compare it to other consoles,” said Panay. “What I’ll say is the demand for Xbox One X right now is exactly where we anticipated, even more so when you see that excitement for the product… this is something that resonates with gamers.”

The Xbox One X will feature some incredible specs when it launches in the new few days. Some of the specs include 1TB of HDD storage with 12GB GDDR5 RAM at 326 GB/s. While these are impressive numbers, Panay touched on the subject of VR and their mixed reality platform for the Xbox One X.

While there aren’t any designated headsets yet for Xbox One X we may “start to see that happen,” according to Panay. “Mixed reality can span in so many different forms, whether it’s off the back of the device, whether it’s in virtual reality headsets that you have, or its HoloLens, you are starting to see that span through Windows and that platform for Windows does bring it to life.”

When the time comes, we’ll be seeing another epic battle clash between Sony and Microsoft when it comes to consoles. PlayStation is already ahead of the game as they’ve sold over a million PSVR headsets in just a year’s span. Microsoft will have to play catch up when they finally release a VR solution for the Xbox One X.

While Microsoft has been a bit quiet about VR support on the Xbox One X, they will most likely be releasing an HMD for the console next year in 2018 to compete against PlayStation on the new frontier. The question we’ll have to ask is if it’ll try to utilize their partner headsets or if they’ll be releasing an OEM solution.