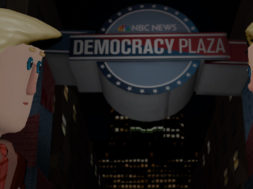 The presidential debates between Senator Hillary Clinton and Donald Trump has been nothing short of a circus thus far. Tonight will be their final presidential debate (taking place in Las Vegas) until the upcoming election on November 8th. As you can imagine this will be a big debate for both Democratic and Republican parties. And with so many accusations against the two, tonight is shaping up to be a good one.

While most of America will be tuning in via TV and mobile devices, there will be some tuning in to the event through the virtual world. AltspaceVR has created a platform that allows users to watch events like the debate Live in VR with people from around the world. As this is an important topic around the world, we’ll see many global citizens partaking in VR watch parties. So if you aren’t at a physical location with friends, you’ll have the ability to tune in with fellow Americans and friends on the virtual platform through AltspaceVR. You can tune in using the Samsung Gear VR, Oculus Rift and HTC Vive.