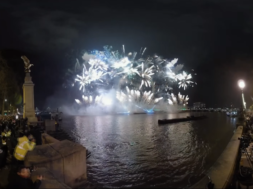 NYE is one night out of the year where the whole world celebrates with glamorous parties and colorful fireworks at midnight. And this 2016 – 2017 night, BBC had the chance to capture New Year’s Eve in London by Big Ben (the giant clock tower) and the Millenium Eye (the giant ferris wheel) in 360 VR.

This video captures the magic of the moment where more than a hundred thousand people gathered together around the famous monuments to see the glorious fireworks popping off in a dazzling way.

With the help of the Google Cardboard and Daydream View VR headsets, you’ll be able to watch this 360 video in VR display. The video starts off with a simple firework display where it moves on to the countdown til midnight starting at the 9:29 mark. Then they drop the heavy fireworks where the event pops off in fashion. The video is quite long (25+ minutes) as this event spreads over the duration of the event. Below is also the track list that’s featured in the 360 video.

It’s quite a site to see and worthy to watch with one of the listed VR headsets.