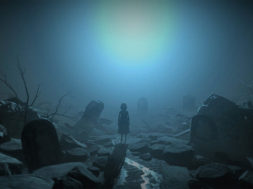 Are you ready for more horror? Like it or not, PlayStation has announced a new VR puzzle-horror game called Soul Dimension by Keen Vision Studios based out of China.

The Soul Dimension series will contain six episodes according to its official description. Users will play as a character named Frank who has the ability to go across dreams. Frank will go on to rescue his deceased daughter Daisy, who is stuck inside these dreams.

In the game, Frank will have to explore, interact, fights and complete various tasks in order to rescue his daughter. But before rescuing Daisy, Frank is put into a more dramatic plot (that we don’t know yet). With the game’s progress, Frank will face his deceased daughter, wife, and other memorable people throughout his life.

In the trailer itself you can see that the game will mostly be taking place during the night time within Frank’s humble abode. But the house appears to be trashed for some reason with clues left all over the place for you to examine. You can clearly see footprints and other hints that most likely lead you to finding Daisy.

Soul Dimension will be bringing the heat and intensity to your PSVR headset as you try to figure your way out through this nightmarish story. The game is available starting today on the PlayStation Store for $4.99. There isn’t a description as to how long the story or game content is but we imagine that it’s quite short considering the file size is only 407MB.

Make sure to give it a whirl though as the price seems quite adequate for what they portray in the trailer.