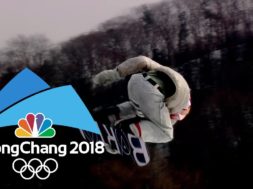 Red Gerard, a 17 year-old phenom snowboarder from Silverthorne, Colorado, has managed to win the first U.S. gold medal at this year’s PyeongChang Winter Olympics. He put down an amazing run in the slopestyle event that won him the prized medal and put the US team on the leader’s board.

Amazingly, NBC in partnership with Intel has released a clip of his run in 360 VR for you to follow along in this amazing run. Gerard is only 17 years of age and beat out many other experienced boarders who have been riding for a lot longer than he has.

Towards the end of the run you can see Gerard stomp a triple cork off the big kicker towards the bottom of the course. This is one of the most elite tricks in all of snowboarding and he made it look like a breeze. This 360 content allows users to see the video in a more immersive way versus traditional 2D videos.

You are given the freedom to look around and observe in a different way. This YouTube video can be viewed on traditional screens or through a VR headset such as the Google Cardboard, Daydream, PSVR, or the Samsung Gear VR. The YouTube VR app is available for free today.