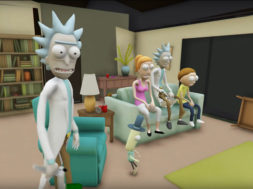 Grand Theft Auto V (GTA V) has been a game long known for its DLCs. While the game itself is quite entertaining, the add-ons are what continues to drive its community. Recently, community members have been releasing mods based around the Rick and Morty series. Using the mods, you can play GTA V as Rick, Morty and even Scary Terry. Most recently, fans have released a mod called “Smith residence” which allows you to go inside the Rick and Morty’s house.

When you enter the living room you’ll also notice an image on the TV that reads Rick and Morty Virtual Rick-ality. On the left is a set of discs that are found in the VR game and even the video game player is quite similar in detail. Another hilarious thing about this mod is that you can go to the backyard and see the graves of Rick and Morty where they buried their alternate selves.

In the featured video you can see the spacecraft that sits right outside the driveway. You can actually hop on in to the spacecraft and drive or fly around in it. If you happen to own a copy of GTA V, make sure to give the Rick and Morty mod a try. You’ll surely be in for a treat.