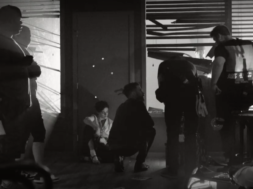 New York Times has come together with some of the hottest celebrities to create a monochromatic 360 VR series called “L.A. Noir.” The series is set in the early 40’s – 50’s where you’ll be taking on roles such as a reporter, bartender, a cheating husband, and etc. L.A. Noir was shot fully in a bar setting.

In the episode shown above, you’ll be playing the part of a dying lover who has been caught in a crossfire. This 360 VR episode features Kristen Stewart who’ll be your partner in crime. She provides a little dialogue and charges out of the bar to shoot at the policemen waiting outside. It’s quite short only lasting 1:36.

You’ll have a chance to catch all nine videos on YouTube or through their newly released NYT VR app which is available at the Google Play store. You’ll be able to watch it in VR with the Google Cardboard and Google Daydream View. All of the shorts are very well narrated and allow you to be in the scene with these famous actors thanks to the 360 VR technology. This is the first time that a cast of this extraordinary caliber has joined together to shoot a project in 360 VR. We hope you give it a chance to see the short magic of Noir in proper VR.

The series was produced by New York Times and Milk VR Studios.