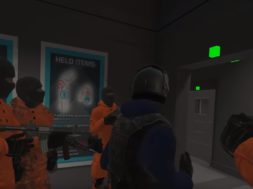 Pavlov is one of the fan favorite games when it comes to VR. Based around the famous Counter-Strike game by Valve, you are in control of a virtual player with the sole mission to annihilate the opposing team. But that narrative has slowly been changing as the game has quickly evolved into something more.

There is a new mod out called Pavlov VR Jailbreak 2.0 which puts you inside a prison. You will be teamed up into two factions: the guards and the prisoners. The mission for the prisoners is to essentially escape prison while the guards are there to basically imprison you or kill you.

Famous YouTuber Nylex basically puts this mod to the test where he and his friends try to escape the maximum security prison.

The level is quite intricate with prison cells, the outside area, cafeteria and more. The mod is more so designed to have fun with your friends and role-play as either the prisonre or the guard. But there are a bunch of weapons around the facility so there is bound to be many shoot outs.

Pavlov VR is currently available on Steam for Oculus Rift and HTC Vive users. It is also on sale for $5.99 so if you are interested in this mod make sure to give it a go.