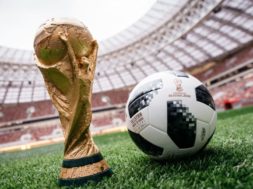 After 4 grueling years of waiting, the World Cup is finally back. The 2018 World Cup is taking place in Russia with the world’s best soccer teams competing to win the coveted prize. And what better way is there to enjoy this amazing tournament then to watch it in VR.

Through Oculus Venues, you will be able to tune in to the live matches via VR. You can hang out with your close friends and connect with thousands of fans around the world while enjoying a personalized and immsersive experience. Fans in the US will be able to watch select 2018 FIFA World Cup matches from FOX Sports for free in venues.

Oculus Venues is available on both the Oculus Go and Gear VR. These are both mobile VR headsets that you can take with you without needing a PC.

Viewers will be able to unlock the FIFA World Cup coverage through venues by authenticating your Pay TV provider subscription. Let the games begin!