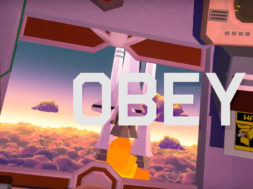 This upcoming title features an insanely immersive VR puzzle-based adventure game where users will find themselves in a secret underground facility, forced to build a moon elevator by the off-kilter, loudmouth President of the World, Doug Slater-Roccmeier. Players will have to repair Roccmeier’s broken elevator by the numbers as he screams weirdness in your ear via intercom… or utterly ignore him and spend your time breaking stuff, hacking the digital brains of a mysterious AI, or maybe even eating space cookies.

Elevator… To The Moon! was developed by ROCCAT Game Director Marc Barnes, Developer Carsten Busold, and 3D Artist Hannah Paulmann. In a short interview with Oculus, Barnes described how they came to develop the game.

“The original idea of solving puzzles in a moon elevator built by a bossy president came not long after Google Cardboard was announced,” said Barnes. “That way you wouldn’t have to worry about tracking or complex inputs and the puzzles, and the environment would change as you ascended into space.

Marc Barnes then had to pitch this idea to CEO Rene Korte to make it come alive. ROCCAT plans on releasing the game at the same time on the Oculus Rift and Samsung Gear VR.

“Developing a Gear VR and Rift version in tandem is a challenge,” Barnes stated. “Carsten and Hannah have worked hard to come up with some really creative solutions to support multiple controller types and a graphical style that translates strongly across both platforms.”

In the trailer, you can hear a silly voice at the beginning which sounds like a mix between Justin Roiland’s voice (Rick and Morty) and Arnold Schwarzenegger. The gameplay shown in the trailer also has a unique aura about it that makes it enjoyable without even playing the game. It actually resembles Job Simulator quite a bit.

ROCCAT currently has high hopes for Elevator… To The Moon! as their demo reactions went really well. It went so well to the point that one woman spent over an hour on a single level while cracking up the whole time.

“I was a little worried when she came out,” Barnes explained. “Turns out she got distracted, trying to throw things at bats, finding the tape for the boombox, throwing stuff into the lava—just generally mucking around and making the president angry.”

Elevator… To The Moon! will be available on Oculus Rift and Samsung Gear VR some time in October. Make sure to stay tuned for further updates!