A New VR Game Called The Walking Dead: Saints & Sinners Is On The Way 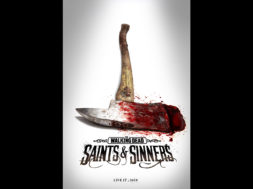 A New VR Game Called The Walking Dead: Saints & Sinners Is On The Way

Walking Dead, a highly popular TV show, is finally being made into a VR game. Last year we reported that Skybound Entertainment will be pairing up with Skydance Interactive to create a number of original VR games based on The Walking Dead universe. Now we finally have the title of the first game called The Walking Dead: Saints & Sinners.

The upcoming zombie VR game will be set in New Orleans and will have players trying to survive the zombie apocalypse, similar to the way you see on the show.

“Skydance’s ability to build worlds and tell compelling stories matches with our goal to bring The Walking Deadfans new narratives and ways to engage with the world Robert Kirkman created, while staying true to his original vision,” said Skybound Entertainment CEO David Alpert and Skybound Entertainment Managing Partner Jon Goldman in a joint statement. “Skydance Interactive is the ideal partner for the team Dan Murray has created for Skybound Interactive.”

This is a multi-year strategy from both companies in creating these unique VR games based on The Walking Dead. The first game will feature an entirely new setting and cast of characters, which players will experience through an innovative contextual interaction system – a first-of-its-kind for The Walking Dead in VR.

They have yet to announce which VR headsets it will be compatible with but we are excited to see the big franchise come to virtual reality. The Walking Dead: Saints & Sinners is set to release some time in 2019 and we will have more news down the road.