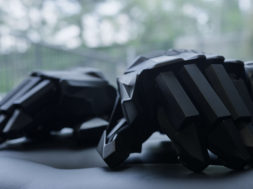 Starting April 25, you can be one step closer to getting your hands on the VRgluv™​.

VRgluv™, the world’s first consumer-priced haptic/force feedback VR Gloves, will be going on pre-sale through their Kickstarter campaign. Compatible with the popular Vive and Oculus virtual reality headsets, the gloves give users the ability to touch, feel, grasp and interact with objects in virtual reality.

Chris Taylor, CEO, of VRgluv™​, was quoted in their latest press release stating, “our Patent Pending technology will have applications in several industries including gaming, education, medical and robotics. Additionally, as an avid and early-adopter of VR gaming, myself, I am thrilled that VRgluv™​ is very focused on initially introducing our gloves to the gaming community. I believe that giving gamers the ability to use “virtual hands” instead of button controllers is literally a game changer. Finally, VR hardware is nothing without great content, and, we are already working with talented developers to create a suite of games that will make for an absolutely incredible variety of gaming experiences from the very first day that our Kickstarter backers receive their gloves.”

According to Steven Fullerton, VRgluv™ Co-Founder, the company is currently focused on seeking established developers to partner with them to help grow their future content library. Last month we featured VRgluv™​ on VR and Fun here. Be sure to check it out for a more in-depth breakdown and all the product’s features.