VRChat Raises $4 Million In Series A Round Led By HTC 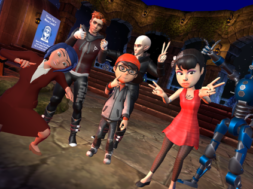 VRChat Raises $4 Million In Series A Round Led By HTC

VRChat has announced that they’ve raised $4 million in a Series A Round led by HTC Vive. They are now the key investor and strategic partner of VRChat. Joining them is Brightsone VC, GVR Fund, and Rothenberg Venture.

VRChat lets users create, publish and explore virtual worlds with other VR users from all over the world. The experience was built as a social platform for the virtual space, similar to AltspaceVR.

“Our goal is to enable anybody to create their own social VR experiences,” said Graham Gaylor, CEO of VRChat. “Partnering with HTC gets us that much closer to achieving that, and driving social experiences for VR forward.”

According to VRChat, this new stash of money will help power the future of the metaverse where they can better serve the consumer and enterprise space. And what’s quite different about VRChat is that their employees all work remotely from around the world. They have their meetings in the virtual space and immerse themselves in their own product to brainstorm their next ideas. The company is currently made up of 16 team members who were directly hired through VRChat.

“Not since the early Blizzard days have I experienced the right mix of passion, talent and magic on a project,” said Ron Millar, Chief Creative Officer at VRChat. “Now that HTC Vive is part of the VRChat dream I foresee the making of something truly epic!”

While we’ve seen social VR spaces such as AltspaceVR not make it through the test of time, maybe VRChat will be able to do so. But they will soon be facing tough competition as Linden Labs gets closer to releasing Sansar. VRChat is available for free today on Viveport so make sure to check it out.