VRChat Might Be The Most Popular VR App For Good Reasons 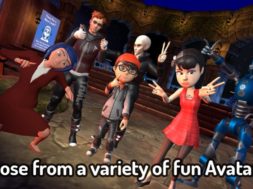 VRChat Might Be The Most Popular VR App For Good Reasons

Playing games on a modern HMD is still relatively new to society. In 2017, we’ve seen a ton of growth and exposure towards the market but nothing that substantially cemented the space. This is even true with AAA games such as Fallout 4 VR, Skyrim VR, or DOOM VFR. However, the gamers and livestreamers seem to be getting swayed towards a social VR space called VRChat.

For those unfamiliar with the app, VRChat is a place where people can create and play in the virtual worlds. Users have the ability to create their own avatars, publish, and explore these fascinating places with strangers and friends alike. These avatars aren’t just some lame pixeled bodies neither.

They are full body avatar builds with lip sync, eye tracking, blinking, and complete range of motion where you’ll be able to express yourself. Just check out how this YouTuber interacts with strangers in this social VR space.

VRChat is both compatible with the Oculus Rift and HTC Vive allowing more freedom of choice. Additionally, the app is available for free which is welcoming to first time users to come check out the virtual social space.

The social VR space also doesn’t have a storyline. Rather, it focuses its attention to its users and allows them to be creative with freedom of choice to build whatever they want in the virtual world. So people have been coming up with their own stories, ways of interacting, and even building their own sub-communities.

VRChat is also the only VR app we’ve seen to reach the top 2 rows of popular streams on Twitch. We have not seen any other VR app reach these numbers and it really has to do with the streamers taking a liking into the social VR aspect.

Popular Twitch streamers such as Pokelawls have been using VRChat on a frequent basis that has drawn in a lot of attention. He comes up with many different skits with his friends that turn out to be quite entertaining.

But he isn’t the only popular Twitch streamer using the VR app. Ice Poseidon is another frequent patron of VRchat. He hangs out with random people in VR to do various things like go on virtual dates.

If we talk about impact in VR, apps like VRChat are definitely leading the way in terms of exposure for the community. More and more people are realizing that through virtual reality you can become whoever you want with strangers. You are exposed to a new level of freedom and space that can be somewhat welcoming.

To me, it feels like the first stages of what the Oasis is in Ready Player One. Make sure to check out VRChat for yourself if you’ve never visited this VR social space.