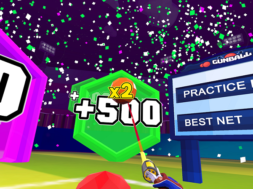 REDspace has recently announced the launch of Gunball, a VR sports and shooter hybrid experience for the HTC Vive. In this game you’ll be encompassed in a fictional world where you’re trying out for the “Gunball League,” a futuristic arena sports association.

Gunball will be testing your virtual athletic abilities with a game that’s similar to tennis. Players will be serving up a ball but rather than hitting it, you’ll be shooting the balls with your guns that propels them high into the air. With imaginative ideas and mechanics, competitors will be placed in the middle of the arena to participate in timed rounds. The objective is to shoot these balls into goal rings for points, accumulating the highest score possible before time expires.

“With Gunball, we feel we’ve created the ideal ‘jumping in’ point for new VR users,” says Jeremy McCurdy, Gunball Game Designer and Games Technical Lead at REDspace. “Built around a comfortable experience but with a deep level of skill underneath it, we feel this game is great to show off VR to friends who may have never experienced it. But, it’s also an amazing skill-based exercise for VR veterans as well.”

Gunball will feature two themed environments, the first of which being “Stadium.” In this environment, you’ll be playing the game center stage in front of thousands of virtual fans. The next one is called “Rainbow Volcano” where you’ll be set in quite an explosive environment (if you get my drift). Each environment will feature five different goal rings with various obstacles set around in different settings. Gunball will allow you to compete against your friends and other challengers around the world to achieve top ranks on the Steam leaderboards.

Gunball will be available to consumers at a discounted price of $9.75 for the first week on Steam. The sale will end on July 5th. Thereafter, Gunball will be sold at full MSRP of $14.99. Make sure to check out the game today to see if you have what it takes to become an elite player in the great Gunball Leagues.

tags: gunball league gunball vr htc vive game redspace steam vr game
previous Song Of The Sea VR Is Ready To Take You Into An Immersive World
next The Recall VR Abduction With Wesley Snipes Might Be Worth A Look
Related Posts