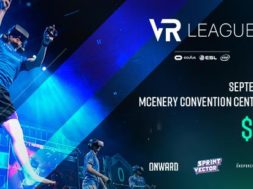 The 2018 VR League esports season is soon coming to the end where teams from Onward, Echo Arena, The Unspoken, and Sprint Vector will be duking it out for $120,000 in prizes.

The VR League Grand Finals is sponsored by ESL, Oculus, and Intel which is promoting the start of an official VR esports league. On September 26 – 27, the best teams will unite at the McEnery Convention Center in San Jose during Oculus Connect 5 and compete Live on stage. Viewers who want to see the event can check out VR League’s Facebook, Twitch and YouTube channels starting at 11:30 AM PST/19:30 CEST on both Wednesday, September 26th and Thursday, September 27th.

On day one, teams will be competing in Onward and The Unspoken. Onward is a 5v5 tactical FPS VR game. Teams will be working in tandem to eliminate the opposing team. The top four teams from around the world will be on-site at OC5.

Globochem has secured a spot in the finals already. Two more teams will be selected during the VR Master League open qualifier on August 11th. The fourth team will be awarded on September 2nd at the Onward Last Chance.

The Unspoken is a duel casting magic VR game. Players take the role of a powerful spellcaster and duel out against opposing players.