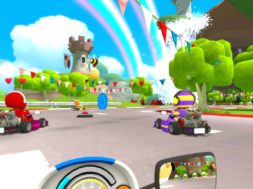 Currently, Mario Kart GP VR is an exclusive to Japan and the Namco VR Zone Arcade in Shinjuku. While the gameplay and trailer looks amazing, we aren’t quite sure if it’ll ever make its way over west. As an alternative solution, Viewpoint Games has released a game called VR Karts which highly resembles that of Mario Kart. In this particular game, you race and destroy your enemies with weapons you find on the race track.

VR Karts has been released for PlayStation VR, Oculus Rift, and HTC Vive. In VR Karts you’ll find various courses that challenges players in their driving abilities. Some of the weapons you can utilize are items such as spike strips which hinders an opponent’s speed and maneuverability.

Something cool about the game is that you can customize your characters and the karts with different colors, helmets, styles, and horns. But other than that, you’ll find the game to be quite similar to Mario Kart. If you have some spare time, make sure to try out the game.