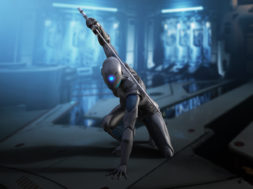 Today must be a good day for the VR industry as another round of funding as been completed. VR gaming studio Survios announced their B & C rounds of funding with $50 million in new capital led by Metro-Goldwyn-Mayer (MGM) for the first and Lux Capital for the second. These combined rounds of funding also included VCs such as Shasta Ventures, Danhua Capital, Shanda Holdings, Felicis Ventures and Dentsu Ventures.

“We are thrilled to be in business with Survios, a true pioneer in the virtual reality space,” said Gary Barber, CEO at MGM. “Survios is the ideal partner for us as we continue to explore the most innovative ways to optimize our existing IP, create exciting new content, and expand into emerging platforms.” With the agreement, Gary Barber will be given a seat on Survios’s board to direct the vision of the company.

Nathan Burba, Co-Founder and CEO of Survios, commented, “I’m humbled to have Gary join our board and to bring on such a storied partner as MGM. This puts us in a position to achieve our goal of becoming the leading publisher and content creator in Virtual Reality.”

The entertainment industry, specifically Hollywood has been garnering interest to the developing VR technology. With these high valuations and funding, they see the unique development of hybrid relations between storytelling and immersion. Current VCs also seem to see the vision of these investments being long-term and experimental. There isn’t a roadmap or guideline to the growing industry and will require patients for the future.

Survios has been successful with the launch of their game ‘Raw Data’ which has been reported to reach +$1 million in sales. With the new round of funding they look to hire top talent and build infrastructures for their games to be played on multiple VR consoles. Their partnership with MGM will also help expand distribution into international venues.

In March 2012 Survios launched Project Holodeck as an interdisciplinary effort at the University of Southern California, bringing together a team of technical artists and engineers to tackle big challenges such as avatar embodiment, positional movement, 3DUI, and game design for VR. As their final project they developed one of the first full-motion VR games ever, called Wild Skies. Soon enough Survios was able to build a truly immersive VR environment that was intuitive, engaging, and entertaining.