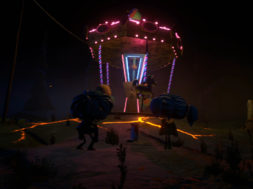 Check Out Gloomy Eyes In VR Voiced By Colin Farrell

If you are one of the many who are currently self-quarantining and need a little enjoyment in life, look no further than these VR games listed below. We have created a list of fun VR games that can hold you down while the virus passes on.

The list of VR games will be mixed between different platforms and we’ll list them out on their availability.

Make sure to keep safe, sanitize, and have fun in virtual reality while we get through the pandemic.