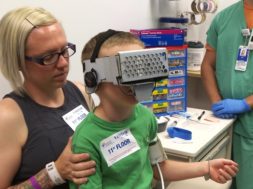 The system’s co-creator, Jeremy Patterson, directs user-experience technology, research and development at the hospital’s Research Institute reported in a statement that of his technology, “It’s led to genuine celebratory moments. People have cheered. It’s kids coming in crying and not wanting to be there, shifting over to people laughing. It’s a complete 180.”

“I’ve never experienced anything like it in my life,” said Patterson. “The moment when you see how it changes tears to smiles — there are a lot of people who work their entire lives and don’t see that effect on somebody. It’s been the project of a lifetime.”

Treatment for hemophilia requires regular poking and prodding with needles, sometimes up to three times a week. Thanks to the use of a VR gaming system, parents of the patients as well as their healthcare providers have found a remarkably calming effect.

The other co-creator, Dr. Amy Dunn, director of pediatric hematology at Nationwide Children’s Hospital, Dunn told The Columbus Dispatch, a local news source, that many children get infusions at home, forcing parents to stick their children with needles. Treatment generally begins at 1 or 2 years old. “The burden that these children and their families face in order to get the right care so that they can remain healthy is very high,” Dunn said. “And there’s no end in sight. It’s a lifelong treatment. You can imagine how daunting that is.”

The games are designed for patients’ individual needs. For those who are not allowed to move their arms and must remain still while an IV line is placed, there are games offered that control gameplay with head motions or breathing into a sensor. One game lets patients breathe fire as a dragon.

The ultimate goal for this technology is to introduce it into a busier, clinic setting where it could benefit a larger pool of patients. More trials and funding are needed before the device can be used on a wider scale. VR technology could be used in various other areas of healthcare such as dialysis and chemotherapy clinics, or any other area where patients are forced to spend a large amount of time.