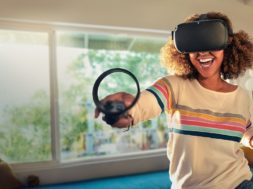 Today marks the launch of the Oculus Quest VR headset. It is a standalone VR headset that is neither tethered to the PC nor requires a mobile device to operate. Rather, it uses a Snapdragon chip to power the HMD. And with that, we’d like to introduce you to some amazing VR games and experiences that you should consider trying out on the new headset.

In the VR game you’ll wield two lightsabers in your hands to smash the oncoming beats. There are two differently squared tiles with arrows on top of them that will tell you on how to slice it.

You must grip the light saber and slice through the tile in the correct position. You’ll usually see the red tiles on the left and the blue tiles on the right. But sometimes, they will switch paths where you must re-orient your hands to match and slice the beat. In addition, you’ll find extra tiles with the letter “X” on them which you must skip over.

“Much in the way Alan Tudyk did with K-2SO, we needed somebody for this role that could create a unique character using their improvisation and performance skills,” said writer and executive producer David S. Goyer. “Maya truly was the first person we thought of, right from the very beginning, and her contributions and sense of humor have guided ZOE3 every step of the way.”

Robo Recall was hailed as one of the true AAA VR games to ever release on the VR platform being exclusively released on the Rift VR headset. Originally created by Epic Games, Robo Recall allowed you to rampage through the city destroying all enemy robots that stand in your way.

Moss features a small mouse character named Quill, who has dreams of greatness beyond the confines of her settlement. While exploring the woods, she finds a mysterious piece of glass and an ancient magic is awakened.

With her uncle now in grave danger, Quill must embark on an epic journey—and she needs you there by her side. Together, you’ll travel to forgotten realms, solve challenging puzzles, and battle menacing enemies. Alone, no one can conquer what you’re up against. But united, you just may defeat even the darkest of villains.

In a world where robots have replaced all human jobs, step into the “Job Simulator” to learn what it was like ‘to job’.

Players can relive the glory days of work by simulating the ins and outs of being a gourmet chef, an office worker, a convenience store clerk, and more.

“Tilt Brush is designed for creators — whether you’re a casual doodler or a professional artist,” says Google Product Manager Elisabeth Morant. “Over time, we’ve seen the product used in ways we never would have imagined — from bringing our favorite Disney characters to life, to prototyping what became a Time Magazine’s best of 2018 invention, to 3D printing and casting a Tilt Brush self portrait as a bronze statue. The possibilities are endless, and we’ve only just scratched the surface.”

Bigscreen is currently the leading VR platform for virtual screen sharing experiences where you can watch movies and videos together in public and private settings. Screens are able to be expanded into the size of actual movie theater screens in the comfort of your home through VR.

For those unfamiliar with the app, VRChat is a place where people can create and play in the virtual worlds. Users have the ability to create their own avatars, publish, and explore these fascinating places with strangers and friends alike. These avatars aren’t just some lame pixeled bodies neither.

They are full body avatar builds with lip sync, eye tracking, blinking, and complete range of motion where you’ll be able to express yourself. Just check out how this YouTuber interacts with strangers in this social VR space.