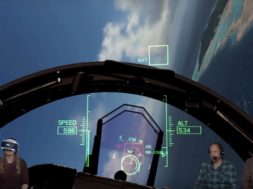 Ace Combat 7: Skies Unknown is properly hyped up to be one of the great big releases this year in VR. While there are some features such as multiplayer mode in VR that might be rolling out in the future, we know that the game will take players into the cockpit of an advanced fighter jet and prepare them to face realistic flight combat in various VR missions.

PlayStation has released a new VR gameplay of Ace Combat 7: Skies Unknown to show you how it all looks on PSVR.

In the gameplay you can see all the trackers and indicators that shows where friendly and enemy targets are. You’ll also see speed and altitude indicators that helps you assist while combating enemies.

Another cool feature about the VR mode is it provides you with freedom to look around from inside your cockpit. You can turn your head and see through skies in which ever direction. This can help you be more aware of your surroundings and even help track bogies in the sky. Your fighter jet will come equipped with heavy artillery such as rockets that you can lock on to enemy fighter jets.

Ace Combat 7: Skies Unknown is currently available for pre-order for $59.99 on the PlayStation store and is set to release on January 18, 2019. There is no news yet as to if the game will be released on other HMDs at a later date. More information will be provided in the near future about the game and updates.