VR Forecasters Are Missing the Potential of Casinos 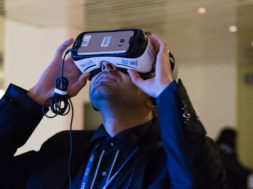 VR Forecasters Are Missing the Potential of Casinos

We hear a whole lot these days about where the virtual reality industry is heading. Last year brought about the release of several new HMDs including the Oculus Rift, HTC Vive, and Gear VR. This year has signaled the rollout of new experiences for those VR headsets. We’re seeing more games, and even practical uses outside of entertainment. The potential of VR seems limitless, but there’s one thing that the writers and analysts buzzing about virtual reality seem to be missing. That’s the opportunity for the continued growth of online casinos through the technology.

One estimate that was put out last fall reports that virtual reality gambling is expected to grow by 800 percent between now and 2021. Of course, this should take into account that VR gaming currently doesn’t generate a particularly large amount of activity when compared to the casino gaming industry as a whole, so the 800 percent growth is relative. But that’s still a huge number. The analysis notes that about $58.5 million was bet through VR platforms in 2016, and the 800 percent that has been forecasted would put that number at $520 million by 2021. It’s expected that this upward trend would be largely thanks to the participation of “high roller” players.

This might appear as an unusually high estimate if you’ve been following the VR trend so far. We usually tend to hear more about traditional console titles or casual app-style games. However, the two are a natural fit. The truth is that casino platforms that have existed online for years have already begun taking steps to create more dynamic gaming experiences. Referred to as “live casino” games, the new features on these sites immerse players in the world of brick and mortar establishments. This is accomplished through live video feeds between the players and dealers and is a practice that could be easily adapted to VR technology. The incorporation of virtual reality is natural and looks like a development that is sure to happen in the coming years.

There’s another external factor that could also play a crucial role. While online casino activity has remained popular and financially lucrative throughout much of the world, it has consistently been met with legal resistance in the U.S. Most U.S. states prohibit the exchange of real money on anything that can be considered a game of chance, and that also presumably includes VR. However, there are signals that this could be changing. Massachusetts is working on possible legalization of online gaming. While this won’t happen overnight, it’s possible we could see more states legalizing this particular type of gaming in the near future.

There are definitely a few remaining questions when it comes to the future of VR. Virtual reality gambling will be one of those to keep an eye on.