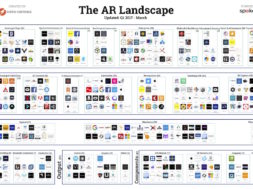 There’s a lot of speculation going on as to whether VR and AR can be a sustainable market. The tech titans of the world have been spending billions of dollars into the market with amazing progress in R&D. The current VR + AR technologies are indeed in its infancy stages but are evolving at a rapid rate due to heavy investments. And with such rapid progress, many experts believe that the market will catapult into something we’ve never seen before.

According to Digi-Capital, the VR + AR markets will reach $108 billion by 2021. This is striking news as its one of the largest figures we’ve seen predicted for the market. In 2016, there was over $5 billion dollars invested into the sectors with promises of fruition. Investors will be demanding results, which can kick the market into overdrive.

A VC company by the name of Super Ventures believes there are six areas of opportunity to invest in when it comes to augmented reality as a result of meeting with 600 AR companies.

The VC group believes bionic vision is the fundamental key to growth for the AR industry. Having graphical information to be indistinguishable from natural vision will be paramount for the future. But the industry must overcome hurdles for this to happen. Companies must work on increasing efficiency in batter life, connectivity, multi sensor-fusion, haptics, and audio. These will help increase senses and visualization.

Interactions must feel fluid while being immersed in AR technology. Our interactions must become more natural to the touch, past the robotic sense for haptics. When we layer digital content over the physical world they must feel unified to provide a sensation and purpose for using augmented reality technology.

There must be a concentrated effort in growing the three-dimensional computing market. Companies must concentrate efforts on creating solutions that can scan, capture, and track the 3D world. It’s currently a challenging problem for companies to track and scan places on a large scale. Companies are figuring out how to track user’s position and overlay the surroundings with digital content. Computing must become more advanced to where they can make sense of the real world around it.

AR must have the ability to grow the world around it. Digital images must make an impact in helping us create useful and supportive surroundings with information and imagination. We need to have the option of creating a metaverse, generated with our thoughts and inputs. People can be distorting the physical surrounding without interrupting others in the physical space.

Communication will become a powerful aspect of AR technology. Having the ability to hold a conference meeting with digital reflections of your counter-part will be something truly revolutionary. And on top of that, telepresence will be able to allow us to communicate visually with our friends and family members. Communication itself will become more immersive versus traditional phone and video calls.