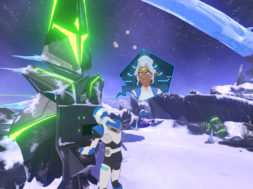 Voltron: Legendary Defender is currently one of the hottest shows on Netflix. Produced by Dreamworks, the animated series brings back the beloved heroes who battles against the evil empire using advanced robotics. Currently, the show is in its third season with the fourth on its way. To help promote the franchise, Universal (who owns the rights to Voltron) has announced that they’ll be launching a new VR game to go along with the series called Voltron VR Chronicles.

The game itself will be produced by Digital Domain and will be available on HTC Vive, PlayStation VR, and Oculus Rift.

The Voltron VR Chronicles will place you in the “Voltron: Legendary Defender” universe where Lance discovers the remains of a lost alien race deep within enemy space. He ends up releasing an unstoppable force that threatens the Paladins and Voltron. You’ll be piloting the Blue Lion as you embark in epic space battles. The game will also involve you solving interactive puzzles and challenges along the way while aboard the castle ship.

In the trailer you can see the Blue Lion that you’ll be piloting. The graphics itself look pretty good and seems like there’ll be a good story to go along with the game. But there is no word yet on the length of content. Voltron VR Chronicles will be single player only.

There’s not much else known about the game besides the basic outlines. The Voltron VR Chronicles game is set to release on September 26th. If you pre-order the game today on the PlayStation Store, you get a 20% discount. What are your thoughts on the upcoming VR game?