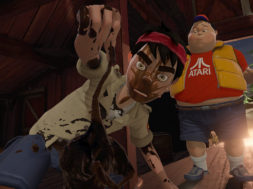 Estudiofuture is an experienced team made up of engineers and developers who create applications to help VR content creators. During this year’s SIGGRAPH, they presented their latest application called VIVO which is a proprietary technology which allows the creation of lifelike and credible characters with ease, and that may represent the future of narrative VR with characters.

During SIGGRAPH, visitors will be able to enjoy an exclusive 8 minutes length demo of ESTUDIOFUTURE’s new and ambitious VR game project in the works, codenamed SUMMER CAMP, which is powered by its VIVO technology.

This AI driven technology blends key-framed animations with physical and procedural behaviors, which provides animators and VR storytellers new tools to synchronize and control the performance of their characters in different situations depending on user´s interactions.

VIVO allows the creation of lifelike and credible characters that react to a user’s actions when they are touched. They will also respond when a user looks at them, interacts with them, or even when no interaction is happening.

According to Estudiofuture, VIVO technology will allow VR creators to “make their characters never repeat the same sentence or action, so the pace of the story never stop and the narrative always flows with no idle characters waiting for the user’s actions, just like in real life.”

They’ve also claimed that this advanced level of interaction with the characters along with a plot that adapts to our decisions and actions, makes users feel completely immersed in the VR experience as if they really are inside the story and have a decisive influence in the universe of the game.

The SUMMER CAMP game demo is an excellent use case example of VIVO technology where users can get fully immersed in an intriguing plot with rich characters. During the demo at SIGGRAPH, users were able to interact naturally with the animated characters to make all sorts of unique actions.

Make sure to check out the demo if your at SIGGRAPH this year.