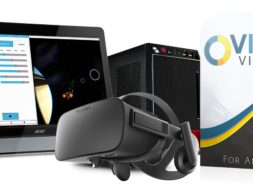 San Francisco based, Vivid Vision, announced today that they’ve raised $2.2 million in a seed round to build VR tools that combat vision disorders such as “lazy eyes” and “crossed eyes,” medically known as binocular disorders. The company’s VR treatment for binocular vision disorders is now available at more than 90 clinics across the world and have benefited upwards of 6,000 people to date.

The funding round was led by Jeff Clavier from SoftTech VC and supported by The VR Fund, CRCM Ventures, SOS Ventures, Anorak Ventures, and Liquid 2 Ventures (co-founded by Hall of Fame NFL quarterback Joe Montana). With this funding, Vivid Visions plans to expand its worth on its unique vision care platform. A significant portion of the investment will be used to bring Vivid Vision to more locations, and the company is also offering a home use version for the Oculus Rift, HTC Vive, and Gear VR, which is predicted to be available later in the year. Users play a set of games specifically designed to help combat their disorders.

The company was founded back in 2014 by CEO James Blaha. Blaha, a developer and lazy eye sufferer, came up with the concept of VR for eye strengthening after personally benefiting from its healing effects. Despite initial difficulties that prevented him from seeing 3D content, he invested in an Oculus Rift development kit and started building a prototype for the platform. Blaha was able to improve his own vision dramatically through practicing various VR experiences, and has since set about trying to do the same for others.

Currently the VR treatment is only available in clinics under the supervision of a trained eye care professional, but Blaha is excited for the home version, which will require a prescription from an ophthalmologist, to be made accessible to the public.“Vivid Vision Home will make vision therapy accessible to millions of new patients for whom treatment was previously too expensive or inconvenient,” said Blaha, in a statement. “We’re really fortunate to be partnered with the best optometrists, ophthalmologists, and vision scientists to make this a reality.”

Check out the video below to see how it Vivid Vision works: