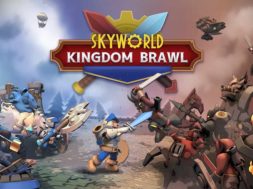 For the first time, PC VR and standalone VR players will join together as the game launches with full cross-platform support for major VR platforms on April 2, 2019.

Vertigo Games is home to their hit title, Arizona Sunshine. Skyworld: Kingdom Brawl is an action-packed, real-time multiplayer card-battler that will turn friends into foes, built exclusively for VR.

Players will be able to unlock, collect and upgrade dozens of cards to build a powerful deck, and watch your cards come to life as you cast spells and summon forces to wipe your enemy off the map. You can join a clan, take on opponents from around the globe in regular online tournaments, and claim your place on the global leaderboards.

“Vertigo Games and Vive Studios have delivered on the VR industry’s desire for a gripping multiplayer game where players can battle friends regardless of their different VR hardware,” said Joel Breton, Vice President, Vive Studios. “We are very excited to be partnering with Vertigo Games to bring Skyworld Kingdom Brawl to the entire VR community.”

“We set out to deliver a consistent, uncompromising cross-platform experience across PC VR and standalone VR hardware with Skyworld: Kingdom Brawl and it’s exciting to see how far we’ve been able to push the devices; from drawing massive numbers of units on screen to delivering awesome combat effects,” said Trevor Blom, Lead Tech at Vertigo Studios.

Skyworld: Kingdom Brawl will be available to demo during GDC San Francisco next month. Gameplay will debut in a cross-platform multiplayer hands-on demo on Vive Pro and the Vive Focus in the VR Play Area.

Skyworld: Kingdom Brawl will be available on the HTC Vive, Oculus Rift, and Windows mixed reality VR headsets starting on April 2. The Vive Focus launch will happen some time down the road. There is no set price point yet.