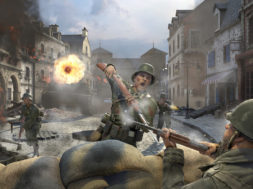 Vive Studios has announced today the launch of Front Defense which takes you into the final days of WWII. You’ll be playing as a soldier who’s on the last line of defense. Your mission is to stop the enemy troops who are trying to occupy critical locations around Europe.

“We’re thrilled to bring VR game players one of the most immersive shooting games they’ll ever experience with Front Defense,” said Joel Breton, Head of Vive Studios. “Our internal development team at Fantahorn Studio has created an unrivaled VR experience in this highly-polished arcade shooter putting players in the boots of a WWII soldier. From its cinematic opening, Front Defense makes the case for VR as the ultimate platform for hardcore gaming, delivering a thrillingly real war shooter where the only missing components may be the smell of gunfire and mortal danger.”

While testing out the game we noticed that the level of difficulty quickly rises and becomes quite challenging. Enemies are quick to move against you and you must be accurate with your shooting.

The game itself makes you feel alive and gets your heart pumping as you have to move a lot in a 3x3M environment. We found this to be a great source for exercising.

The controllers take a little getting used to as some of it feels unnatural. To pick up a weapon you have to push down on the trigger rather than pushing the side bumpers which seems more natural (personal preference). But other than that, we found Front Defense to be a fun, quick-paced arcade style game.

Front Defense VR is available for download today on Viveport for $19.99. Make sure to give it a go and test out for yourself what the buzz is all about!